As a result of his Industrial Manufacturing Technician apprenticeship, Rick Bostwick is moving up the career ladder at Dayton-Phoenix Group. 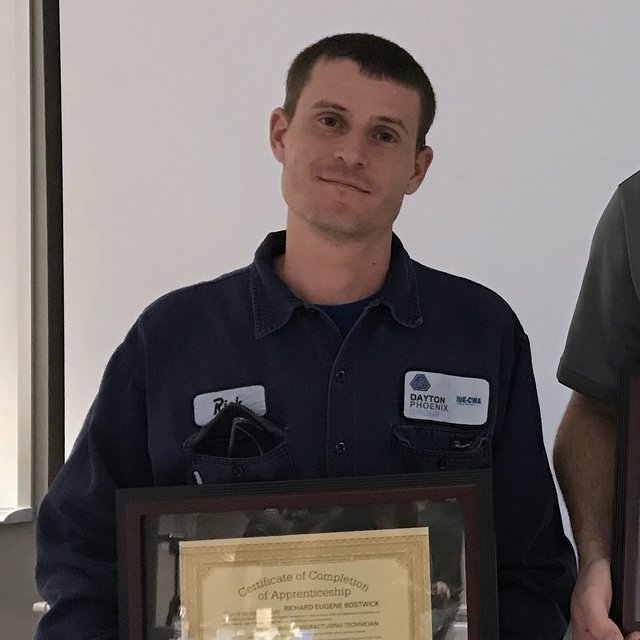 In 2016, Rick Bostwick had been working on factory floors for more than 10 years when he got an opportunity to learn new skills that would be in demand in a changing economy.

Rick’s company, Dayton-Phoenix Group, and his union, IUE-CWA Local 755, approached him and his coworkers to encourage them to sign up for the Industrial Manufacturing Technician (IMT) Registered Apprenticeship. A two-year program that combines classroom instruction with on-the-job training to train frontline manufacturing production workers, the IMT apprenticeship was being offered with assistance from the Ohio AFL-CIO, the Labor Institute for Training (LIFT), and JFF.

While Rick recognized that it was a good opportunity, he felt he had developed quite a bit of expertise in his many years on the job, and his initial instinct was to step back and let some of his more junior coworkers have a shot at learning new skills.

“I could tell right away that it was going to be an investment—that the company was investing in their employees,” Rick said, but added that he “didn’t want someone to miss out on the opportunity”—perhaps someone who “could have benefited from it more than me.” And after all, with over a decade of experience under his belt, he wondered, “What are they going to be able to show me that I don’t already know?”

Then he thought about his daughter at home and asked himself this question: “I preach education to her. How can I not apply?”

He considered how quickly manufacturing was changing. His employer, a Dayton, Ohio-based manufacturer that supplies electrical and locomotive components to the industrial and railroad industries, was working to incorporate new methods of lean manufacturing. Rick knew that mastering new skills and developing new ways of thinking were essential to keeping up.

Rick applied for a spot in the IMT program and was accepted. He quickly discovered that it would be a worthwhile experience. “We were challenged from day one,” he said.

The program also emphasized communication skills, and Rick said he and his fellow apprentices had to do a project that culminated with a PowerPoint presentation to the class—an event attended by the owners of the manufacturing facility.

“For the comms presentation, I did a lot of work at home,” Rick said, adding that he used it as an opportunity to share what he was doing with his daughter and his fiancé. “I was able to make it work, where I was able to invest the time and also bring my family together.”

In November 2018, Rick was one of the first graduates of the IMT program in Ohio. “Once I left the program, I returned to my production job and I felt much more comfortable in decision-making. I tried to share what I learned with my coworkers, what the program was about.”

Soon after Rick received his IMT journeyworker certificate, Dayton-Phoenix had an opening for a quality technician and he decided to apply. “I felt like with my skillset, my training, and my experience that I would be a good candidate for the position,” he said. “I feel like the program really gave me that confidence that I had a good shot.”

In his new role, Rick makes sure standards are being upheld in a designated part of the production facility and does final inspections. “I’m responsible for any parts in my department that are on hold, defects, things of that nature,” he explained.

After just two months in his new position, Rick said the skills he acquired through the IMT program had already proved invaluable. “There’s constant measurement, constant blueprint reading,” he said, adding that the communication skills he developed have also been essential because he now has to communicate via various systems, including e-mail.

“The program has definitely benefited me,” Rick said. “It can be a steppingstone for accelerating yourself within a company.”

With support from WRTP/ BIG STEP and JFF, manufacturing employers have transformed the skills of their workforce with apprenticeship programs like the Industrial Manufacturing Technician Registered Apprenticeship.