Nancy Hoffman is vice president and senior advisor at JFF, where she leads the Regional/State Youth Career Pathways Systems team.

Over a decade ago, the Gates Foundation, still new to education reform, asked JFF to take on a risky and ambitious venture: to lead a national partnership to create accelerated high schools for struggling low-income students.

The start provoked skepticism from school reformers of all persuasions. These early college high schools were designed to take young people who were working below grade level and enable them to graduate with not only a diploma, but also a two-year college degree. Would this be another idealistic—but ultimately unrealistic—reform plan?

Fast forward 12 years and the answer is clear: As of 2014, JFF and our partners had created 280 early college schools serving more than 80,000 students, and the results are remarkable. Analysis of data from several thousand students showed that one-third are graduating high school with an associate’s degree, and the average early college graduate has attained 38 college credits, a critical head start on completing a postsecondary credential. The results are particularly significant considering that 75 percent of the young people are students of color and/or from low-income families.

The schools adhere to a relatively simple set of principles: integrate high school and college curricula, provide intensive academic and social-emotional supports, and demonstrate the expectation that all students will graduate and continue their education. The work depends on partnerships with nearby colleges and intermediary organizations across the country.

The most notable adaptation of early college responds to economic imperatives: career-focused early colleges from which students graduate with an industry-recognized certification or an Associate’s degree with currency in the labor market. JFF’s Pathways to Prosperity Network now works in 12 states to build these grade 9-14 programs primarily in three career areas: health care, IT, and advanced manufacturing.

IBM has further publicized the value of career-focused early college models by launching Brooklyn P-TECH (Pathways in Technology Early College High School), in partnership with the City University of New York and the New York City Department of Education. Students complete an Associate’s degree in an IT field. An internship is built into the six-year curriculum, and graduates are first in line for consideration for an entry-level position at IBM or a similar company. Critical elements of the model include mentors for every student, structured workplace visits, skills-based paid internships, and integration of workplace skills into the curriculum.

Several states are providing support to replicate the P-TECH model. IBM is the industry partner for four P-TECH schools. By 2016, there will be close to 100 P-TECH schools, with networks in New York State and Connecticut.

If the original early college model was met with skepticism, the first P-TECH provoked even more questioning. How would the target population (predominantly Black or Hispanic males from low-performing schools) meet the challenging STEM requirements of an Associate’s degree in computer systems technology or electromechanical engineering technology?

IBM does a great service by keeping the field informed about P-TECH’s progress. Updated outcomes for the inaugural group of 96 students, now in their fourth year, were released last week and are promising:

Even in this early stage, P-TECH is substantially outperforming New York City schools serving a similar population. A first class in a new school is always challenging, so these results are especially encouraging.  We predict that the results will get stronger over time—which is already the case with subsequent classes. Bravo!

JFF is committed to ensuring that all young people—particularly those who are low-income and first-generation college-goers—have equitable access to high-quality education that leads them to and through a postsecondary pathway and helps them launch successful careers.  We are confident that the grades 9-14 seeds we planted with early colleges years ago will continue to grow, as P-TECH and other adaptations of early college continue to yield positive outcomes for our young people, our communities, and our economy.

Using experimental designs, Julie Edmunds and colleagues at the University of North Carolina at Greensboro’s SERVE Center have been researching the results of early college high schools for years. One study tests a theory that much of early college success is due to what Edmunds and colleagues call “mandated engagement”—that the high expectations and support of teachers and school culture keep students on track to college readiness and success rather than resigning them to less rigorous academic work.

The study concludes that students work with teachers who “purposefully and proactively” prevent them from disengaging. This stands in sharp relief to most studies of adolescent engagement that find “40 to 60 percent of high school students…chronically disengaged.”

Using a subset of results from a broader longitudinal experimental study funded by the Institute of Education Sciences, the study found that early college ninth-graders have higher attendance, lower suspension rates, and higher levels of acknowledged challenge, compared with a control group. They also report that school personnel have higher expectations for them, relationships among adults and students are stronger, adults provide more support, and instructional practices are more rigorous and relevant.

Among students interviewed for the study, one said tellingly, “In my middle school, I made F’s and stuff, but here it’s hard for me to make an F.”

The study, “Mandated Engagement: The Impact of Early College High Schools,” originally published in 2013, was featured in Teachers College Record on March 6. 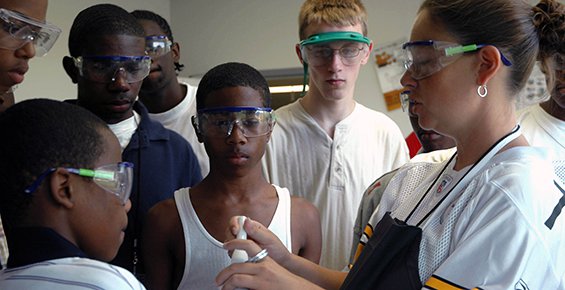 I was the first in my family to go to college. For many early college high school students, this is their reality, and this reality is one I share. I was in high school in Boston over 25 years ago

This blog was originally posted on GenDIY Blog on Huffington Post Education . This blog was also available on Tom Vander Ark's Getting Smart Blog . If you're between 16 and 24, you've probably looked for a job, and maybe

When it comes to college and career readiness, most reform initiatives focus on the former and not the latter. But in order for today's youth to succeed, career readiness needs some serious attention.