What DACA Taught Us about Supporting Vulnerable Students

By Sarah Hooker, Jobs for the Future, and Radha Biswas, International Workforce Development

The fate of the Dreamers remains up for grabs, as Congress and the White House spar over competing policy priorities that could determine the future of this vulnerable group, as well as the broader population of immigrants and refugees. While lawmakers consider what comes next, it is imperative that they find a solution that improves upon, rather than erodes, the already-shaky protections that existed under Deferred Action for Childhood Arrivals (DACA). Only a permanent, trusted form of relief for Dreamers—one that doesn’t trade away the safety of their undocumented family members—will allow these young people to focus on fulfilling their potential, with the unequivocal support of the schools and colleges that serve them.

DACA opened doors to unprecedented economic and educational opportunity for hundreds of thousands of Dreamers who came to this country as children. But, as we learned from recent conversations with community college administrators in several states, it did not quell the undercurrent of fear that persisted on many campuses.

Jobs for the Future conducted a series of interviews with a cross-representative group of community college and system leaders on their efforts to support undocumented students in spring 2017, prior to the Trump administration’s decision to terminate DACA. While the national context has shifted dramatically in a few short months, many of the things we learned are worth highlighting as we look forward to future policies affecting the Dreamers. Our findings include:

In spite of these challenges, we know that DACA had a tremendous positive impact on the lives of approximately 800,000 young people and their families over its five-year duration. As countless DACA grantees have attested, postsecondary education became more affordable and relevant, as students finally had an opportunity to apply their studies toward their career goals with legal work authorization.

Now is our nation’s chance to do the right thing and pass a law improving on the original order that even President Obama called merely a stopgap. Whatever form this legislation takes, it is critical that the “interim” status for Dreamers pursuing citizenship comes with strong protections that are well communicated to the field. Washington must send a clear message that the group’s economic, intellectual, and social contributions are valued. Without this vital guarantee, backdoor threats of potential deportation or penalties for educational institutions that protect undocumented students will continue to undermine efforts to support the success of these 1.8 million students and workers, resulting in squandered opportunities and harsh consequences for the economy. 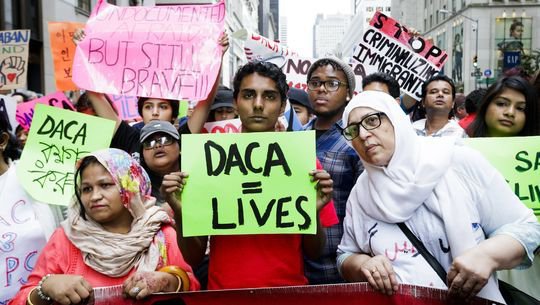 On September 5, the Trump Administration announced its decision to end the Deferred Action for Childhood Arrivals (DACA) program six months from now, throwing hundreds of thousands of young people’s lives into turmoil. Ending DACA will halt the considerab