The Rennie Center for Education Research and Policy’s recent report, Early College Designs: Achieving College- and Career-Readiness for all Massachusetts Students, profiles three Massachusetts school-college collaboratives, elaborating on the components of their programs and analyzing the costs. The brief makes a strong case that more early college high schools would greatly benefit the students of Massachusetts, as they have benefited the young people of 30 other states.

Massachusetts is a national leader in education in many ways, yet the state has only a few early colleges. How can this be? Early college designs have a proven record of success improving graduation rates and postsecondary success, particularly for youth from traditionally underserved backgrounds, and so these school-college collaboratives are programs worth expanding.

Why So Few Early Colleges in Massachusetts?

It is not just that we’re a state with strong local control. So are several other states that have built many early colleges. Nor is it a lack of interest in collaboration between high schools and community colleges, many of which enroll some high school students on accelerated pathways with the limited funding available from the state. And it’s not only about funding.

There are two important reasons that other states have succeeded in spreading early college. First, in states with many early colleges, the early college model is a pillar of the state’s high school and college completion strategy, and policies don’t just enable but rather promote early college with incentives for schools, colleges, and families to participate. Policymakers in other states calculate that the costs of accelerated high school-college combined diplomas are lower than four years of high school followed by college—something that the Rennie Center brief did not mention. (This might have left the impression that early college is expensive, since there are start up and tuition costs initially.) Second, to create early college at scale requires external support for planning, roll out, and sustainability along with internal high school and community college leadership. The expectations gap between high school and college is a wide one that is not easily bridged without the help of experts in such partnerships.

JFF began designing and supporting the development of early college schools nationwide in 2002, with the support of the Bill & Melinda Gates Foundation and other philanthropies. While JFF provided the initial guidance to a set of nonprofit partner organizations chosen by the Gates Foundation, states that built strong networks of early colleges serving thousands of students created new special-purpose organizations—local intermediaries—to collaborate with state government in working to ensure that early colleges are high quality, and can carry out their mission with success.

To take the Texas and North Carolina examples, Educate Texas and North Carolina New Schools benefit from their states’ forward-looking dual enrollment and early college policies and financial support. In turn, the states benefit from these organizations’ special expertise in working across high school and community college—not an easy partnership. Both organizations assist in early college design and planning, co-train teachers and professors, design curricular pathways, and help schools develop internships appropriate for younger students. Their leaders are also the champions and advocates for early college in their states, and testify before legislative hearings and work with their state departments of higher education and secondary education to ensure good results.

JFF has benefited from Department of Elementary and Secondary Education (ESE) and U.S. Department of Education support to provide technical assistance to developing early college schools. Marlborough began its design work with funding and support from ESE and technical support from JFF to create a STEM early college in 2006. There are now over 600 students enrolled starting in sixth grade—middle performers, not the usual AP crowd.

More recently, JFF applied for and won a highly competitive Youth CareerConnect grant from the USDOE to support further work in Marlborough, Brockton, and West Springfield with the local Workforce Investment Boards and community colleges as partners.

In addition, Massachusetts benefits from its membership in the Pathways to Prosperity Network, a JFF-led network supporting the design of grades 9-14 early college career-focused models in 40 regions in 12 states. The Edward M. Kennedy Academy for Health Careers and the Community Academy of Science and Health in Boston, along with West Springfield and Marlborough High School and their partner community colleges (Bunker Hill, Springfield Technical, and Massasoit), benefit from assistance as regional sites for Pathways to Prosperity. And JFF assembled and guided the collaborative team opening the SAP, Bunker Hill/Charlestown IT-focused program this fall. While not formally associated with JFF, Amesbury sought advice from JFF as it developed its model, which had a champion in the high school principal as well as in a now retired dean at Northern Essex.

But without an aggressive and affirmative state-level policy, the Departments of Elementary and Secondary Education and Higher Education in Massachusetts will be challenged to expand early college in Massachusetts. With such a policy, the nonprofit community will be able to collaborate with the state to scale early college to lower the cost to completion of a postsecondary degree for the state, families, and young people.

The Rennie Center is a major resource to school reformers in Massachusetts, and its much-anticipated yearly report on the state of education in Massachusetts contains policy analyses that make an invaluable contribution to dialogue in the state. The brief is part of the Center’s Roadmap to Expanding Opportunity series.

I was the first in my family to go to college. For many early college high school students, this is their reality, and this reality is one I share. I was in high school in Boston over 25 years ago 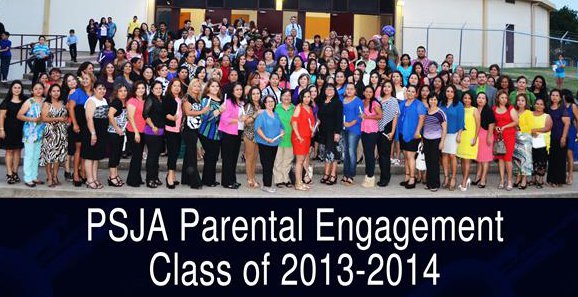 In three impoverished communities near the Texas-Mexico border, hundreds of parents are following in their children's footsteps. Through the parental engagement program, they engage in education and improve their own opportunities.