We need a new word in the English language. It’s a combination of academic and career focused—“caredemic”? “acacreer’? Among education improvers, too much of the discussion I hear today poses an either or proposition—young people get career education through a two-year vocational or CTE pathway OR they go to college, which means heading to a four-year BA or BS. This language implies that the career-focused pathway happens only at community college and is about certification or an applied associate’s degree, while a “real” degree takes four years or much longer, happens at a liberal arts college, and is the only way to ensure a middle class career. This is specious thinking, and having language that reinforces the split is unfortunate.

If we can’t find a new word, at least we should reflect on the four points below:

Point 1 is self-evident. It’s people my age (I should be retired) who go to college for the pure joy of learning and with no thought to career implications.

Point 2 leads one to ask why people who should know better call a four-year degree academic as opposed to “caredemic.” The most popular majors in the US today are business, health, psychology, and education, and all are pathways to careers. Of course, if you opt for 120 credits (bachelor’s) instead of 60 (associates) you can take a wider range of courses, and that is a difference.

Point 3. Data on salaries immediately out of two- and four-year institutions, and 5 and 10 years after tell us that it’s not the degree alone that matters, but your major. And a good number of career-focused two-year career programs out-perform liberal arts majors in earnings (Carnevale et al. 2011).

Point 4 is troubling because it speaks to the rightfully sensitive issue of tracking. This is the issue I unpack below.

Associate’s Degrees a Barrier to Bachelor’s?

Many higher education systems are working to improve transfer, but the work is tedious and slow. Here’s what’s happening in my state, Massachusetts: The Mass Transfer Block currently in place assures transfer of 34 credits, but, as in many states, the catch is that not all courses meet requirements of a student’s college major and the general education courses associated with it. So students end up with “elective” credit and thus pay for and take more than the 120 credits needed for the bachelor’s degree. Today, the MA Department of Higher Education, working with the state university campuses, has defined major-by-major the courses within each discipline at two-year institutions that students must take if they want to transfer without credit loss to any public four-year institution in the state. It’s taken three years, and when 16 majors are complete, they will cover the disciplinary choices of 70% of our students. Other states have similar initiatives underway or already completed.

Associate’s Degrees and the Transfer Process

So are students with career-focused associate’s degrees especially disadvantaged in the transfer process? In addition to preparing students for employment, many Associates in Science degree programs do transfer to four-year colleges and universities. A comparison, for example, of the Business transfer degree and the AS finance option at Bunker Hill Community College in Boston shows the following: the general education requirements in the two degrees are the same: writing, microeconomics, psychology, etc. Only math differs, but both math courses transfer. For another popular field, computer science, both the transfer option and the “workforce” option require pre calculus plus calculus 1 and 2 and physics.

Other fields—culinary arts, for example—do not require transfer math, and so a student would need additional course work or substitute courses either at Bunker Hill or at the transfer institution. But BHCC’s academic information tells students they can prepare for transfer if they wish. In addition, Bunker Hill notes: “Graduates of this option qualify for entry level managerial positions as well as for management training programs in hotels, restaurants, corporate offices, and conference centers.”

The latter statement is an additional important reason not to dismiss career-focused two-year degrees. First, career preparation allows students to get a job right out of community college, and then decide whether to go on. If they’re lucky, their employer may provide tuition benefits as well as additional training. Second, they may avoid the boredom many students complain of when faced with two years of general education courses, and they may be more engaged and likely to complete a degree if they are trying out a career area. Yes, transfer is still a rocky road, with bumps and detours for too many students. And yes, the culinary arts student may require additional course work if she wants to transfer, but my hunch from watching students with career-focused associate’s degrees go on to get bachelor’s degrees is that they are motivated to go on, not held back, because their career preparation and work experience gives them a purpose and a focus. Whether we use “caredemic” or “acacreer”—and probably we won’t use either—we need to stop using language that describes the choices available to students as either/or. 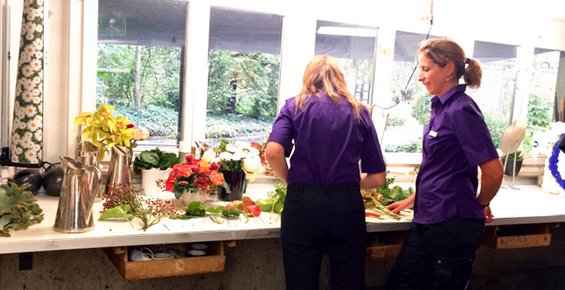 Young professionals in Interlaken, Switzerland. Photo taken by Amy Loyd, senior director at JFF. The United States is investing in apprenticeship, as well as expanding the scope of careers covered under the registered apprenticeship umbrella—this is great